|In News, Blockchain
|By SIMBA Chain 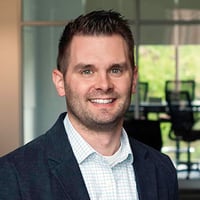 All it took was a phone call, a single phone call, to ignite an enduring partnership and eventual startup company that could be the University of Notre Dame’s first unicorn. SIMBA Chain.

In 2014, Joel Neidig was happily working in the family business, Indiana Technology and Manufacturing Companies (ITAMCO), a 65-year-old company in Plymouth, Ind. ITAMCO’s core business is manufacturing precision gears for heavy duty industrial, military, mining, and construction applications. But with a degree in computer science and a penchant for technology, Neidig had developed a series of manufacturing-related apps that caught the attention of Steven Schmid, a professional of mechanical engineering at the University of Notre Dame.

“He asked my dad (Gary Neidig) and I about collaborating with Notre Dame and other universities on research projects funded by Small Business Innovation Research (SBIR) grants and launching startups from the technology,” recounts Neidig. “We had never considered these types of projects before; we kind of did our own thing. Government-sponsored research and development was a mystery. We didn’t know where to start.”

The idea of collaborating with Notre Dame and the opportunities it would afford proved irresistible to the Neidigs. In 2015, ITAMCO, Notre Dame, and the University of Pittsburgh were awarded a $1.6 million grant from American Maker to develop technology for additive manufacturing. Never ones to do things halfway, the Neidigs invested $1 million in a 3D metal printer for ITAMCO to support the project, but also because they realized 3D metal printing would have a profound impact on the future of manufacturing.

“We saw the potential to transform not just the manufacturing side of our business,” Neidig says, “but also to launch an entirely new, technology development division based on startups.”

When the American Maker project came to an end, ITAMCO licensed the resulting technology from the Notre Dame IDEA Center, founding a 3D printing software company called Atlas 3D. The company was acquired in late 2019 by Siemens. While working with the Notre Dame Center for Research Computing on the Atlas 3D software, Neidig met its director, Jarek Nabrzyski, and a research faculty member, world-renowned expert in distributed computing, Ian Taylor. Impressed, Neidig made a mental note to get back with Nabrzyski and Taylor if the right project came along.

It didn’t take long before an opportunity presented itself in 2017 in the form of a grant from the Defense Advanced Research Projects Agency (DARPA).