With Bitcoin and other cryptocurrencies reaching new highs at the end of 2020 and the beginning of 2021, there is unprecedented interest in crypto. Some people may now have serious interest in crypto for the first time, leading to new questions about how Bitcoin really works. Aside from blockchain and distributed ledger technologies, one of the key aspects of Bitcoin is mining, though it is still rather misunderstood. In this post, we'll explain what exactly Bitcoin mining is and whether it's a profitable use of your time.

WHAT ARE BLOCKCHAIN WALLETS AND HOW DO THEY WORK? FIND OUT HERE

What is Bitcoin Mining?

For the uninitiated, Bitcoin mining is the process of earning Bitcoin in exchange for verifying Bitcoin transactions. Colloquially referred to as "miners," those who verify Bitcoin transactions provide security for the Bitcoin network, which is invaluable to Bitcoin, so miners are paid with the cryptocurrency. Obviously, when the price of Bitcoin (greater than $33k at the time of publishing) is higher than the cost of the mining process itself—mining centers do require a lot of computing power—then miners can turn a profit.

How Does it Work?

Miners are essentially auditors on the Blockchain network: they verify the legitimacy of Bitcoin transactions to keep Bitcoin users honest. Bitcoin's mysterious founder—(or founders? No one is sure.)—came up with the idea for verifying transactions to prevent what is known as the "double-spending problem," in which a user makes an illicit copy of a digital token to use the same money twice.

For a real-world example, imagine you have a legitimate $50 bill and a counterfeit one, if you were to look at both bills and recognize that they both have the same serial number, you would conclude that one was fake. Though it's not a one-to-one comparison, Bitcoin mining is similar to that—miners check transactions to make sure that users have not attempted to use the same Bitcoin twice. 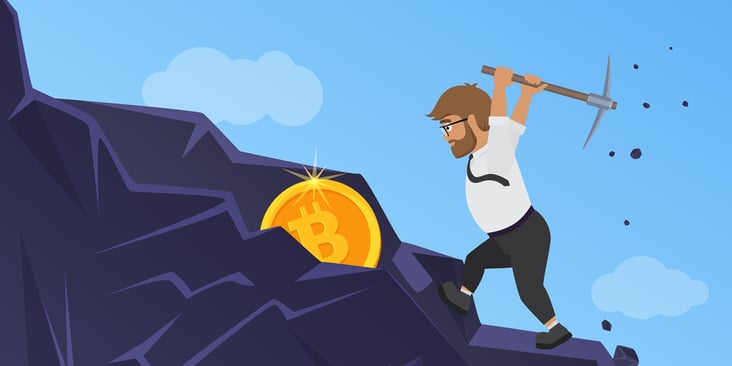 Bitcoin mining can be a laborious activity, but it can also be fruitful.

So, is Bitcoin Mining Profitable?

Because there are many factors in play when we seek to answer that question, the short answer is it depends. The cost of electricity, the availability of a computing system, the power needed to run that system, and the difficulty in providing the services (more on that in a bit), and, naturally, the cost of Bitcoin itself will all affect the miner's profit margin.

The difficulty of mining is measured as a rate of hashes per second, but it is affected by the number of miners at the time of mining. Bitcoin's network is designed to produce a certain level of bitcoins every 10 minutes, so as more miners enter the market, it becomes more difficult to maintain the correct level.

There is also the significant matter of halving. After 210,000 blocks of data have been mined—which takes approximately four years—the payout for miners is cut in half. This is done to keep the number of total Bitcoins available finite. The most recent halving occurred in May 2020, with the next one currently estimated to take place on March 11, 2024. Though this does not negatively affect whether mining is profitable, it is worth being aware of if you're considering picking up a virtual pickaxe.

With Bitcoin at a record-high, chances are that mining Bitcoin is profitable, though exactly how much you stand to profit is a bit more complicated. As you can doubtlessly see, there are many things to consider and to be aware of before you start planning your financial future around Bitcoin mining.

How is Bitcoin's Price Calculated?