|In News
|By SIMBA Chain 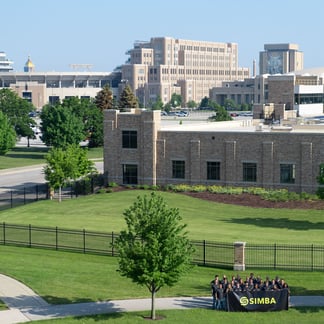 SIMBA Chain, a startup incubated at the University of Notre Dame, offers a simple, time and energy efficient method for deploying blockchain technology in the most secure and complex environments. Its state-of-the-art technology autogenerates a robust family of APIs that support permissioned and public blockchains, allowing customers to launch blockchain applications without hiring costly consultants or consuming valuable tech expertise. And, because SIMBA Chain allows users to select from a wide range of blockchain technologies, with portability across these chains, the company provides a level of flexibility and customization that traditional blockchain approaches cannot support.

SIMBA’s CEO and co-founder Joel Neidig stated, “Demand for our Web3 smart contracts platform has accelerated across all of our markets much quicker than we anticipated. Users across multiple spectrums have embraced and validated the SIMBA Chain model, which simplifies development of smart contracts. The market has also responded positively to our support of multiple blockchains, including Ethereum, Avalanche, RSK, Stellar, and many others, making SIMBA Chain-based applications simple, highly portable and sustainable.” SIMBA Chain’s technology is currently used by Fortune 500 companies as well as other multi-billion-dollar organizations.

Steve O’Hara, managing partner at Valley Capital Partners of Menlo Park, California, said, “Since its founding in 2017, SIMBA Chain has distinguished itself by solving the incredibly hard problem of making blockchain technology, which is inherently complex and difficult to master, accessible to literally anyone who wants to realize the advantages blockchain has to offer. Thanks to the intellectual depth and insatiable curiosity of its team, SIMBA Chain has succeeded in establishing impressive beachheads in the defense and enterprise markets – a rare thing to see in emerging frontier technologies like blockchain. We are excited to support SIMBA Chain at this pivotal time.”

With the additional funding, SIMBA Chain plans to scale sales, marketing, and development, and to dedicate resources to emerging enterprise level opportunities such as non-fungible tokens. SIMBA Chain expects business enterprises, academic institutions, and others will use its software to manage and monetize digital and physical assets as well as to launch business models that don't exist today.

“This is one of the more exciting blockchain companies I’ve seen in a while,” observed Joseph Grundfest, a Stanford Law School professor, former commissioner of the Securities and Exchange Commission and member of Stanford’s Center for Blockchain Research. “SIMBA Chain solves a very big problem; most companies don’t know how to adopt or manage blockchain technology. SIMBA Chain makes that easy and cheap, so it’s a bit like Stripe for the blockchain. Also, by writing on energy-efficient blockchains, SIMBA Chain’s ‘green solution’ responds to concern that some blockchains contribute to global warming.”

Despite the past year’s economic disruptions, SIMBA Chain has remained laser focused on unleashing blockchain’s potential for enterprise, government, and education as the first examples of what will certainly be numerous use cases. Over the last 18 months, SIMBA Chain has achieved the following milestones:

Said Neidig, “The entire SIMBA Chain team is elated by this new investment and what it represents. We are grateful to everyone who has recognized our potential, and we look forward to the future.”