|In Awards, Blockchain
|By SIMBA Chain 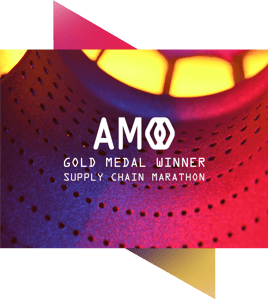 The Advanced Manufacturing Olympics was created to bring together technology companies, startups, traditional and non-traditional U.S. Department of Defense contractors, academia, and student to help solve some of the Air Force’s most significant sustainment issues. SIMBA Chain entered the competition with a multidisciplinary team that included ITAMCO, the University of Notre Dame and C5BDI, and was rewarded for their award-winning performance with a check for $100,000.

SIMBA Chain CEO Joel Neidig led the team to victory, thanking the U.S. Air Force and Assistant Secretary of Acquisition Will Roper for the opportunity to compete in the Advanced Manufacturing Olympics, an experience he called intense. “We literally had six days to put together an entire war games solution to deliver critical parts to a battlefront, keep field hospitals operational and infrastructure like runways intact. What was different about our approach was how we met both the physical challenges of war fighters as well as the cyber threats that are playing a growing role in modern warfare.”

All of the Supply Chain Marathon competitors were given the same scenario: a fictional island called Elfmore was under siege. How could additive manufacturing be deployed to keep aircraft, weaponry, field hospitals and infrastructure operational? SIMBA Chain’s winning response combined portable, self-contained Rapid Additive Manufacturing Labs capable of printing metal, plastic, and composite parts on demand with the interconnectivity and cyber security of blockchain to deliver unprecedented additive manufacturing capabilities to forward-deployed military units, front-line medical staff and relief organizations.

“The key component of any supply chain is security and particularly critical to fast-changing military operations,” Neidig explains. “Including blockchain in our strategy set SIMBA Chain apart as our additive manufacturing labs were digitally and securely interconnected with one another and with military command This ensured the integrity of communications and that whatever was needed could be built to military specifications without compromise from external forces. This strategy resonated with the judges.”

The ultimate goal of the Air Force’s Advanced Manufacturing Olympics is to identify innovative ideas that have the potential to be translated into commercial solutions. SIMBA Chain is already working with several arms of the U.S. Department of Defense, including the U.S. Air Force and the Navy. Neidig has high hopes that blockchain, and specifically SIMBA Chain, will soon be an integral part of the U.S. military’s strategic weaponry.

Below is the video from SIMBA's Winning Submission