Tokenization vs Encryption: An Overview

|In Security
|By SIMBA Chain

There are many terms and methods around cybersecurity, that are often and easily confused, so finding the right security technology for your company’s data can be difficult. There are so many options out there so let’s compare two emerging principles within data security—tokenization vs encryption—what they are, how they work, and whether one is a better fit for your company.

Click Here to Read Our Enterprise Guide to Blockchain

Year over year, we’ve seen an increase in hacking and cyberattacks, leading to massive data breaches and data exposure. Even the most financially stable companies and critical infrastructure are susceptible to these. While IT solutions companies are doing great work both predicting and identifying cybercriminals’ ever-evolving methods, cybercriminals are notoriously effective at finding and exploiting even the smallest hole in the fence. As well as cybersecurity businesses are creating measures to protect crucial data, data breaches still happen.

But what if there was a way to make the data usable to the people and businesses that rightly own it, but useless should it fall into the wrong hands? This is where the practice of data obfuscation comes in. Sometimes known as data masking, data obfuscation modifies sensitive or important data in a way that renders it of little or no use to an unauthorized person, but still usable to the appropriate personnel. There are several data obfuscation techniques, but both tokenization and encryption are among the most effective ones.

Encryption is the process of using a complex algorithm to alter the plaintext information into a non-readable form known as ciphertext. In simplest terms, encryption takes reader data and alters it so that it appears random. This ciphertext cannot be converted back into readable form without the needed decryption key.

Encryption can be used in different ways, each suited to different use cases, but the most common uses of the method are secure data exchange, protecting data at rest, and structured and unstructured data. There are, though, two primary approaches to encryption:

Another interesting application for encryption may be the use of “half-keys,” which, individually, would unveil part of the cyphertext back into plaintext, but together would decode all of the cyphertext. Check out our blog on multisig wallets for more on this principle.

The term tokenization comes from the Payment Card Industry Data Security Standard (PCI DSS). It is a process of turning a meaningful piece of data into a random string of characters called a token. The token itself has no meaningful value, and it only serves as a substitute for the actual data. However, a token cannot be used to guess the original data in case of a breach. This is because tokenization, unlike encryption, does not use a cryptographic method to transform sensitive information into cyphertext. 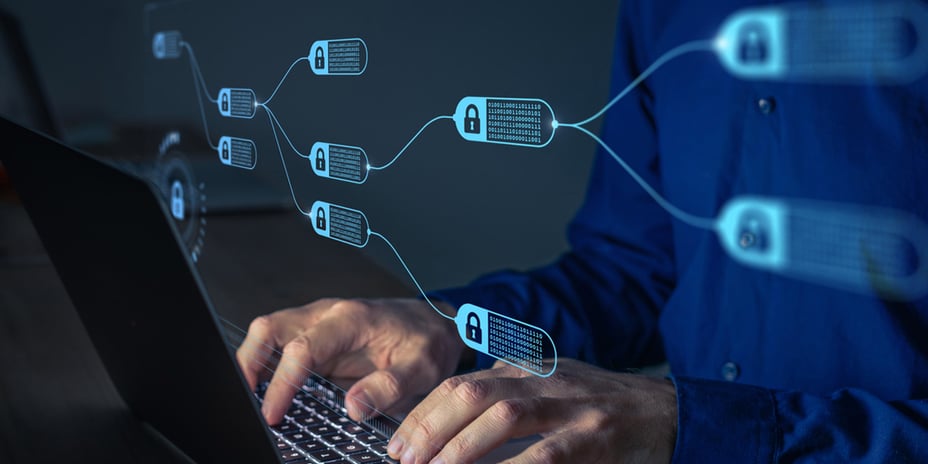 Tokenization is a method of disguising meaningful data into a random string of characters.

No key nor algorithm can be reversed to derive the original data if it’s been tokenized. Rather, tokenization uses a token vault database that stores the relationship between the token and the sensitive value. Optionally, the real data in the vault can be further secured via encryption, which brings an additional layer of security. The design of the token also takes user-friendliness into account. For example, when you receive a text message informing you of an online transaction, it’s not uncommon for the last four digits can be preserved as a token displayed as “*******1234.” This is done so you can see a reference to the actual bank account or card number used for payment, but the information itself is not useful to a bad actor.

Now, the word “tokenization” sounds like common vernacular in the blockchain space, right? After all, Non-Fungible Tokens (NFTs) are one of the hottest topics in the blockchain space. Yes indeed! Within the context of blockchain, tokenization is the process of converting something of value—in this case, data—into a digital token that’s usable on a blockchain application. In blockchain, tokenized assets come in two forms: tangible assets like gold, real estate, or art; or intangible assets like content licensing, ownership rights, and even voting rights. Because the tokens only serve as a reference to the original data, the data itself never leaves the organization, which can help satisfy certain compliance requirements.

Tokenization vs Encryption: What’s Best for You?

Ultimately, if you can both tokenize and encrypt your data, that would be considered the gold standard of data security. As more organizations move their data to cloud storage, data security methods such as encryption and tokenization will be used extensively for securing data. These security measures definitely have applications and uses for today’s end users in every industry. For more on blockchain and its uses for data security, contact SIMBA today.

Busted Through the Blockchain