|In Team Members
|By SIMBA Chain 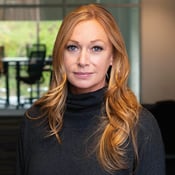 JN: You have great IT experience. How did you choose the field and what are some of the biggest changes you have seen?

SI: I graduated from the University of Oklahoma with a degree in information systems management in the late 1990’s and jumped into a career as a developer. Web apps. Full stack. Frontend javascript. Backend databases. I got hooked because of the creativity of development. I then took a decade off to start my family and once I got my boys in school, I returned to the tech industry, earned my Certified ScrumMaster® designation and began supporting development teams. One of the biggest changes is the number of women in tech. There used to be very few; I was often the only female in the tech companies where I worked. Fortunately, I had a great woman boss who gave me a hand up.

JN: You have an interesting connection to SIMBA Chain. Tell me about it.

SI: I’ve known Ian Taylor (SIMBA CTO) and Kieren Evans (director of engineering) since 2016. Ian and Kieren were consulting on a software project and I worked with them as the project and scrum manager. These two are some of my all-time favorites; they are clever, witty, brilliant, and kind. And Ian knows everyone!

JN: What attracted you to SIMBA Chain?

SI: Two things. This is my first time to work in blockchain, and I’m really excited to be part of a new technology that will totally change how we share, store and trust data. Being part of SIMBA Chain puts me right in the middle of this transformational technology. As a former developer, the beauty of SIMBA Chain is we have taken something complex and overwhelming for most people and made it simple. For enterprises that want to utilize blockchain and don’t have the tech chops, SIMBA Chain is a great solution.

I have to say Ian and Kieren also influenced my decision. I’m really impressed with SIMBA Chain’s team; it’s topnotch. You’ve been very thoughtful in building out the roster with very talented people. The fact that I have a history with members of the SIMBA Chain team allows me to hit the ground running. I also appreciate that while we’re a distributed team with people across the globe, we’re able to get together in person regularly.

JN: Have you ever worked with a startup like SIMBA in the past?

SI: Yes, and what I’ve learned is startup companies have to do two things: cast a wide net for customers and execute with precision once you get them. If you’re going to build a sustainable business, focus on delivery.

JN: What are your responsibilities as project manager?

SI: I’ll be working closely with you, of course, and the sales team on proposals. Once they’re in the door, I’ll be involved in developing project roadmaps. We have a lot to build with our military contracts and a lot in the pipeline so project management is very critical. Another big part of my job is reducing “noise” and overhead for the team. SIMBA Chain has recently won some major projects – one being the $9.5 million contract with the U.S. Navy – and there’s a multitude of tasks associated with each one. The team has to trust me to keep track of all of the moving parts, clear obstacles out of the path and keep everyone on deadline.

JN: What do you do when you not managing SIMBA Chain projects?

SI: My husband, three sons and I escape to a 200-acre resort ranch we own in West Texas called “Best Day Ever Ranch.” We’ve got horses, donkeys, dogs, and a llama named Tina. It’s a wonderful place for weddings, corporate retreats and for teaching boys how to drive. There’s not much kids in a truck can hurt out there!

JN: Sound like a great place for a future SIMBA Chain retreat.